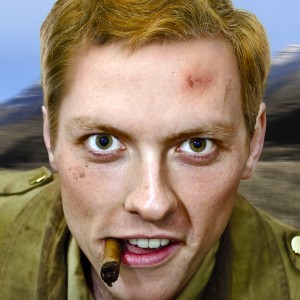 It’s 1899 and escaped prisoner-of-war Winston Churchill is in a fiendish spot of bother: lost in the African savannah, wanted ‘Dead or Alive’ and hounded by the scathing words of his dead father. Will he surrender, or fight on – whatever the cost?   Experience the coming-of-age of Britain’s greatest hero in this gripping true story of adventure, audacity and Imperial folly.

Fol Espoir is an ambitious young theatre company primarily dedicated to new-writing and devised creations. Winston On the Run premiered at the Edinburgh Festival in 2012 and has had many rave reviews.

Winston On the Run – Spring and Autumn Tour