Whose Story Is It Anyway? 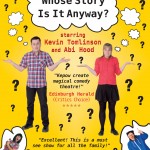 Kepow are recognised as one of the UK’s most creative and funny theatre companies!

They have had sell out tours to New Zealand, Canada, Norway and America.

Kepow have created a BRAND NEW COMEDY THEATRE show FOR KIDS called Whose Story Is It Anyway? and are bringing it to the The Glasshouse Arts Centre  ONE DAY ONLY this January.

It premiered on April 5th this year at the Banbury Mill Theatre, where it sold out and then went to York Theatre Royal on April 9th.

This wonderful comedy theatre show guarantees to make children (and adults) laugh out loud, as it celebrates the power of the human imagination.