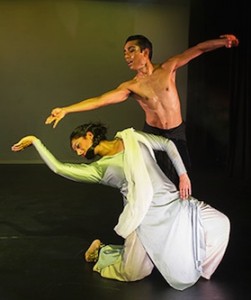 Labyrinth brings together two of the UK’s finest artists, Sonia Sabri and Ash Mukherjee for a sumptuous performance of South Asian dance, Kathak and Bharatanatyam.

The evening unveils two virtuoso soloists illustrating the distinct power of each dance style originating from the North & South of India. Sonia performs her immaculate Kathak, expressing the fluid, lyrical and rhythmic and Ash unleashes the bold, architectural & majestic language of Bharatanatyam.

“Sabri and Mukherjee work brilliantly together with their styles of dance sometimes blending and sometimes jarring in an echo of those contrasts…..totally mesmerising.” Diane Parkes, Behind the Arras.