One of Us Must Die

Part of the Why? festival, supported by Disability Arts Network and Black Country Touring. 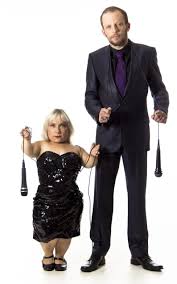 With Kiruna Stamell and Gareth Berliner

Hope for those who think they‘ll never meet ‘the one’ and the laughter of recognition for those that already have!

One of Us Will Die exposes – with humour – the hidden discrimination facing the disabled community in matters of love. And gives hope to the bent and disfigured in an age of body fascism, where myths and Hollywood lead us to believe love is only for the traditionally beautiful.

Kiruna Stamell is an actress with dwarfism previously seen in Baz Lurhmann’s Moulin Rouge and on TV in All the Small Things, Eastenders, Cast-offs, Ricky Gervais’s Life’s Too Short and recently acting opposite Geoffrey Rush in Giueseppe Tournatorre’s The Best Offer.

Gareth Berliner is a stand-up comedian who’s performed at festivals and in comedy clubs internationally and all over the UK, and worked with renowned stand-up collective ‘Abnormally Funny People’.

“She burst impatiently on to the stage, all 3ft 6” of her, a sparkling bomb in her glitzy black dress… dominating the stage by sheer force of personality…and a natural ability to draw in the audience. Every star comedian needs a straight man and Berliner played the role to perfection: hesitating, confused, uncertain.” Disability Arts Online.