A new project has been launched to create a 21st Century replica of the famous Portland Vase. The project was the result of a conversation between Ian Dury; who will be coordinating the project and local Cameo Engraver Terri L. Colledge after she relocated the business to Ruskin Glass Centre on Wollaston Road in Stourbridge. 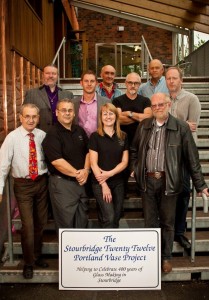 Ian, who has worked in the glass industry for 43 years, said earlier today; ’the project is a fitting display of the glass skills we still have in the area today especially 400 years after the first glass makers settled here’.

The ‘Stourbridge Twenty Twelve Portland Vase’, will see a replica of one of the most important pieces of glass in history; The Portland Vase. It will be one of the most poignant displays of modern day skill and talent to come out of Stourbridge’s internationally renowned Glass Quarter in many years. What makes the project even more significant as it will be in celebration of 400 years of glassmaking in Stourbridge. The project has even gained the support of Dr Paul Roberts from the British Museum.

The last person to create a replica in Stourbridge was John Northwood back in 1874. In 1873 Northwood was approached by Phillip Pargeter, owner of the Red House Glass Works in Wordsley, about the possibility of making a reproduction of the famous Roman Portland Vase. Pargeter was responsible for producing the blank with Northwood then tasked with carving the intricate design.

All the work will be carried out on site at Ruskin Glass Centre for visitors to witness. The glass used will be sourced from Plowden & Thompson, the Cameo blank is to be blown by expert glass maker Richard Golding then the piece will be engraved over subsequent months by Cameo Engraver Terri L. Colledge. The aim is to complete the piece to coincide with the International Festival of Glass in August 2012. Ruskin Glass Centre will be publishing the dates and times that work is being undertaken on the vase on their website; www.ruskinglasscentre.co.uk , so that visitors can be a part of history in the making on their doorstep.